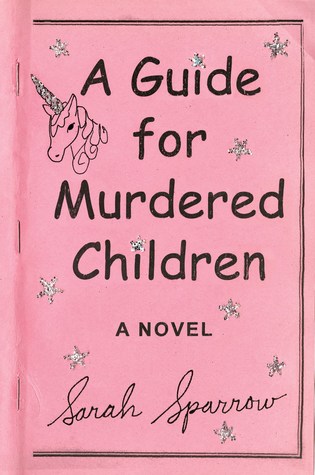 What if child murder victims could exact revenge on their killers? The premise to Sarah Sparrow’s A Guide for Murdered Children sounded perfect for serial killer/horror junkies like me! The story itself did not disappoint. With plenty of well-written characters and the crime elements, I was impressed with this novel.

It took me a while to get into the story; the reader is thrown into the narrative from the first page, which can be quite confusing. The plot seems jumbled and unstructured for the first 150 pages. From here, the story feels as though it could have been told without the first section, as this information could have been given in 1-2 chapters without confusing the reader. However, after getting to this point, the reader is certainly rewarded with an exciting narrative.

Willow is an ex-detective who worked in cold cases. He retrieves his job after multiple stints in rehab, where he works with two deputies to crack these unsolved mysteries. They are attempting to solve the disappearance of two children from Willow’s past. This part of the storyline could have been its own book, as it definitely had all the elements of a great mystery.
Annie is the ‘porter’ for murdered children who have returned to exact revenge on their killers. They inhabit the bodies of recently deceased adults, and live the adult’s life until they find their killer and have their ‘moment of balance’. This section of the story is inhabited by lots of different characters, which I enjoyed as the reader sees the journey taken by a few of the children. Annie goes through ‘haywire’ as she prepares to pass her position to the next porter. This causes most of the events in the narrative and makes the children do things that they would not normally.

If you can keep track of the characters’ storylines and enjoy lots of things going on, this book will be perfect for you. I really liked the story from Willow and his deputies, and felt that this had a brilliant end to it. Some of the coincidences were a little bit cheesy, and it often felt as though there were too many people involved in the ‘other world’ who were connected to Willow. In terms of characters, he was enjoyable to read; he does not always choose the right path, but is redeemable and knows his true place and purpose by the ending. I also liked the way Roy Eakins’ character was portrayed, as he was the perfect villain. Sparrow’s choice of when to reveal information about characters lent itself expertly to the narrative, as the reader only realises who is to blame when the author chooses for them to.

Sparrow’s writing appealed to me, as she described murder excellently, and made me care about the characters a lot. She builds tension brilliantly and does not bother with an overhaul of description. I think the way she avoids writing too directly about characters’ appearances is genius, as it means that the reader can interpret them as either the child victim or the adult host. I do think that a lot of the first section of the narrative could be cleaner, which could create room for more depth to some of the children’s backstories.

Overall, I would recommend this book to horror lovers who can handle a supernatural touch. I would not stretch so far as to say this would be classed as a fantasy novel, yet would also not discourage fantasy fans from reading it.

I received an advance review copy of A Guide for Murdered Children on NetGalley in exchange for an honest review.